On Saturday and Sunday the team at the Quiros Center has taken specific training to the new “Physium Sport”. Physium Sport is a device that helps us increase the depth of the usual manual treatments. Freeing deep fascias. The fascia is a tissue that surrounds muscle fibers, allowing its sliding with other structures. Ex.: muscles, nerves, arteries and veins. 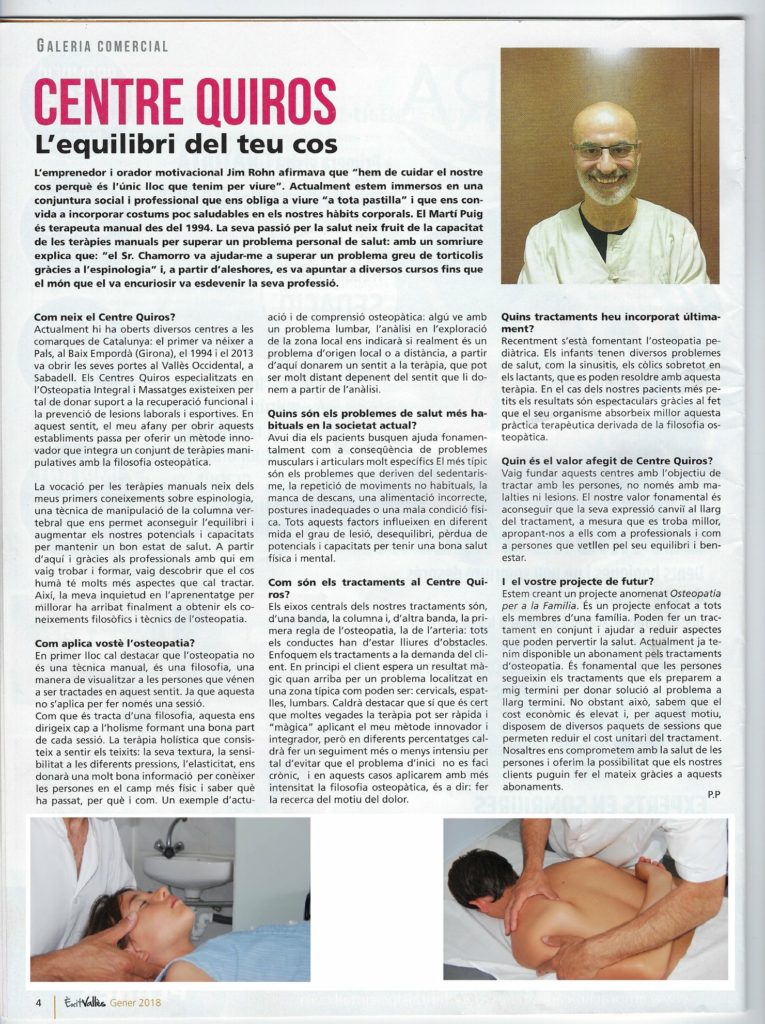 Comments Off on Personal monitoring

In my desire to grow as a manual therapist, I´m letting you know that during the treatments that you receive at our center, from this year on, we will send you an email, or give you a copy by hand in your next visit, detailing the reasons why you began treatment, a personal assessment, and the treatment to be followed.


Manual procedure on the shoulders (VIDEO)

Comments Off on Manual procedure on the shoulders (VIDEO)

Comments Off on Voluntary skeletal muscles

The skeletal muscles (almost all of them voluntary) are clearly the most numerous group of muscles in the human body. More than six hundred surround almost every millimeter of our body. They represent approximately 35% of body weight in women and 45% in men, and are the principal determinants of our physical form. They are also responsible for:

1) On the level of continuous contraction, known as muscle tone, it is the force that holds us upright and prepared to act, despite the forces of nature (gravity, wind).
2) Four layers of skeletal muscles connected to the ribcage and pelvic bones protect the internal organs of the abdomen.
3) By means of contractions and cellular respiration, the skeletal muscles play an important role in the equilibrium (homeostasis) of constant body temperature. If the hypothalamus (heat generating center of the brain) detects a fall in body temperature, it sends a signal to the muscles and they SHIVER. This increase in muscular activity generates heat, which raises the body´s temperature.

Every movement of the body requires various muscles to work together to initiate, maintain, and control the movement. The driving mechanism generates the main action, while the synergetic muscles contract with the mechanism to keep it going.
At the same time, the antagonistic opposing muscles have to remain relatively relaxed, which allows for the acting mechanism to complete a balanced action.

In the complex movement of throwing a basketball, three active mechanisms are involved: the deltoids in the shoulder, the biceps in the upper arm, and the round pronator in the forearm. The corresponding antagonist muscles are the major round, the upper-arm triceps, and the supinator. But keep in mind that if the muscles of the back and legs are not free to move, the throw will be defective.


Pyramidal syndrome in the athlete

There are various causes that can product this pyramidal dysfunction, which is characterized by a strong pain in the buttocks. This pain can even mirror the symptoms of sciatica (despite being a false sciatica), as this thick nerve passes below this muscle.

A primary cause could simply be the excessive use of the gluteal muscle complex combined with inadequate rest. This creates an irritation of the fascia that blocks the free circulation of blood, creating a vicious cycle of affected muscle. The cause of the muscular irritation is due to not being able to eliminate toxins created by energetic metabolism. We have to reduce and free the entire vascular system in the area, thereby breaking this vicious cycle and freeing the toxins more quickly. In this way the recovery will be successful.

Another cause could be related to a dysfunction of the sacrum. This will produce an anomaly in the normal movement of the muscle. In this case we could say that the muscle is stretched too much for normal functioning, producing strain in its work, leading in extreme cases to difficulty walking.
Our job will be to use our techniques to reduce the dysfunction of the sacrum, together with a relaxation of all the muscle chains that could affect the free functioning of the sacrum–“spinal column, abdomen, and extremities”.

This article is thanks to the attention that I was able to give to my patient with this symptom. Her cause was multi-factorial (the most common); that is, an excess of muscular work added to a dysfunction of the sacrum– As with all people with this type of problem and those who have trusted in our way of working with this and other types of problems.

We are expanding our home services. Call us to request an appointment for a home visit and all of the necessary information.

Remember that the service hours offered at your home can also be paid, if necessary, by credit card, as in our offices.

Often in the street or on the sidewalk, we suddenly stumble and shock our entire body. We even think that we might have crunched a bone, or all of them, but we don´t think it´s important and within 2 or 3 days, or at the same moment, we feel a pain that paralyzes us and we don´t know why–“if we haven´t make any effort”-.

This stumble could well be the cause of an imbalance, that must be corrected so as to prevent a series of dysfunctions.
Say it isn´t so!

Note one thing: the cause of the stumble is not our fault. It is the fault of the sidewalk that is damaged or sometimes poorly designed, but we don´t focus on that. It could be a vision problem that caused a miscalculation of the space, in a critical moment, or a problem with the cervical vertebrae that limits normal movement. If we have good overall balance this situation would not happen, as with good head movement together with good coordination of the field of view, we have a better view of the sidewalk.

Indeed, we could also save ourselves from injuries such as: twisted ankles, bumping into streetlamp poles, foolish falls, etc.

I found a very interesting article related to how the way of giving birth can have different aftermaths in life.